Alicia Keys on a Blaze of Glory! -Set The World On Fire Tour (Concert Review)

The 14-time Grammy winner and piano maestro Alicia Keys set Atlanta, GA ablaze on Friday, March 29, 2013 as she rolled in her 14th tour stop of her current 24-city North American leg for her very own “Set The World On Fire Tour” in support of her 5th studio album Girl on Fire which bowed at #1 on Billboard’s Hot 100 Charts during its first week of release in November 2012.

The show took place in the middle of Downtown Atlanta at Phillips Arena and was one of capturing moments that was sure to remind the audience (myself included) of why [Alicia] is mounted atop of her game still to this day never mind the few naysayers she’s garnered along her 12 year career thus far. 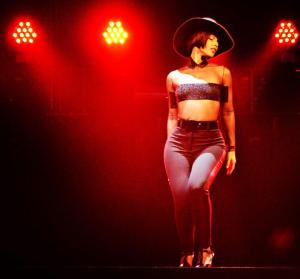 The bad of the show:

Emerging R&B star Miguel opened the show for the night and his brief 45-minute set should have been longer. Since Keys did not blaze the stage until an hour afterwards I was highly confused as to why they only allotted him such short amount of time, especially considering he just won a Grammy for his hit single “Adorn.” Other than that Miguel held his own as an opening act, but whew, his time on stage flew by!

Keys kept this tour immensely subtle, parallel to its supporting album, perhaps? There were the flashy lights, and blaring sounds, with dramatic effects, but it was heard and seen softly. The opening of her set was a refrain from her and Jay-Z’s modern day classic “Empire State of Mind” and I have to admit, but her previous The Freedom Tour (2010) opener was much more grand and electrifying.

It is no secret that Alicia Keys is no dancer. The entire night she aimed at hip movements and a lot of hand movements to distract and trance the eye. It worked to her advantage, and at times like when performing uptempo cuts like “New Day” and “Limitedless” I was fearful for what would have happened had she had a full blown 8-count or more.

Nonetheless, Alicia also kept things moving the entire night in the same costume. It was disappointing to watch, however, the one costume highlighted her body so it became okay after all.

The set list. It was not bad at all, however, some songs that were left off I questioned why. The singer included 11/13 tracks from the current Girl On Fire album and left behind hits like “How Come You Don’t Call Me Anymore?”, “Teenage Love Affair”, “Superwoman”, and cutting the second verse of “Try Sleeping With A Broken Heart” and new cut “When It’s All Over” in order to make room for the total of 23 songs set list inside of a right under two hour show window. Overall, the positive outcome from questioning her choice to leave off certain songs made you realize that this chick has an extensive catalog.

The good of the show:

The beauty of Alicia Keys simply cannot be denied. It is impeccably hard to dismiss her stunning face and figure. With that same stunning figure, Keys showed it off in only of two ensembles for the night. The first consisting of a fitted pair of black tuxedo pants accompanied by a half-nude and black sheer top that tucked tightly in her pants revealing a much curvy Alicia. The second outfit consisted of a fitting black sparkly gown that showed a bit of skin with a back opening and luscious train that followed every step she took as she performed hit “Empire State of Mind (Part II) Broken Down” as an encore.

The high off life feeling that Alicia Keys is on right now is infectious. Since marrying producer Swizz Beatz and giving birth all in the past three years the singer has been all smiles. Her vibrant energy ignited Phillips Arena from the moment she stepped foot on the stage.

Her voice. Alicia Keys’ voice has been one of many shots and ridicule in the past couple of years. Many have deemed it to not be what is used to be. However, one thing that is for sure Keys came the night prepared for any negativity about her vocal ability. Every note sung from the singer was pitch perfect, strong, and right in place.

The piano. Along with her striking beauty it would be hard for one to deny Keys’ piano skills. She sent a friendly reminder of that as well. Having played 3 different pianos throughout the night Alicia Keys tickled the ivories like she had been playing for 100 years in another life. In keeping her more mellow moments at the piano afresh, the changing of pianos was a great tactic that kept you wishing you could play, and also tooted her horn on how versed she is with the instrument.

Overall, Alicia Keys delivered, and she did so in such a humble and essential way that captivated each eye in Phillips Arena. She performed every ounce of soul she had and managed to do so all alone for right under two full hours. Her passion soared higher with each song. Alicia Keys’ flame does not seem to be dying down anytime soon. So listen up, America, this girl is most definitely on fiyyyyya!

Her current 3rd single, “Fire We Make” a duet with Maxwell can be heard sizzling airwaves as fans anticipate the release of its video and more to come from Alicia Keys and her Girl On Fire album.

The April 11th stop in New York City at Madison Square Garden will be one worth a million flames seeing that it’s Keys beloved hometown.

Seven more dates remain for the tour as Alicia Keys moves her way through the north east, stopping in New York City on April 11th to grace a sold out venue at Madison Square Garden. There will be much pressure for this show as it’s Alicia’s hometown and seeing that she recently stopped in Brooklyn, NY on April 6th at Barclay’s Center where she had guests Maxwell and Method Man at separate times join her on stage. Will Jay-Z and/or Beyonce join her at Madison Square Garden?…

You can view and buy tickets online at http://www.ticketmaster.com

Set The World On Fire Tour -North American leg comes to a close in Chicago, IL on April 18th. From there, Keys will departure overseas for the 2nd leg of the tour which will take her all the way through Summer 2013.

All photos courtesy of AliciaKeysMedia.com

One response to “Alicia Keys on a Blaze of Glory! -Set The World On Fire Tour (Concert Review)”